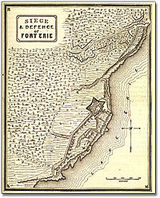 Description:
The Siege of Fort Erie was one of the last and most protracted engagements between British and American forces during the Niagara campaign of the American War of 1812. The Americans successfully defended Fort Erie against the British Army but subsequently abandoned it because of shortage of supplies.

The Americans under Major General Jacob Brown had crossed the Niagara River and captured Fort Erie on 3 July 1814. After defeating a British force at the Battle of Chippawa they advanced north but the British reinforced their troops in the Niagara peninsula. On 25 July, the bloody but indecisive Battle of Lundy's Lane was fought, during which Brown was severely wounded. Following the battle, the outnumbered American troops, now under the command of Brigadier General Eleazer Wheelock Ripley, withdrew to Fort Erie. Ripley advocated abandoning the Fort and retreating across the Niagara but Brown overruled him and summoned Brigadier General Edmund P. Gaines from Sackett's Harbor to assume command.

The British, under the command of Lieutenant General Gordon Drummond (the Lieutenant Governor of Upper Canada), had themselves been hard hit at Lundy's Lane. Drummond nevertheless claimed that the Americans had been forced to retreat in disorder and he intended to drive them from the Canadian side of the Niagara. His troops followed the Americans slowly and reached the fort on 4 August....
Read More