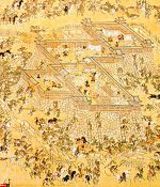 In 1597, Japanese attacked Korea again, but after suffering a series of defeats, Japanese troops retreated to the southern Gyeongsang province. Without provisions and reinforcements, the Japanese forces had to remain in the coastal fortresses (known as wajō) that they still controlled. The Japanese commander Katō Kiyomasa army were stationed in Ulsan, and Kato built a Japanese castle, Ulsan. Commanders Yang Hao and Ma Gui led an army of 44,000 Chinese, and Commander Gwon Yul led an army of 11,500 Koreans, in a first assault on January 29, 1598. They caught the Japanese army unawared and still encamped, for the large part, outside Ulsan's unfinished walls. The Japanese managed to drive off the allies and withdrew into the castle, but lost 500 men in the process.

A total of around 55,000 troops with the help of singijeons and hwachas...
Read More