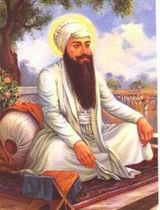 Description:
Sikh gurus are the 10 Gurus who established Sikhism from over the centuries from the years 1469 to 1708. Sikhism was founded by the first guru, Guru Nanak, and subsequently, all in order were referred to as "Nanak", and as "Lights", making their teachings in the holy scriptures, equivalent.

According to the Shiromani Gurdwara Prabandhak Committee website, Sikhism has a very specific definition of the word "Guru":

<blockquote>It means the descent of divine guidance to mankind provided through 10 Enlightened Masters. This honour of being called a Sikh Guru applies only to the 10 Gurus who founded the religion starting with Guru Nanak Dev Ji in 1469 and ending with Guru Gobind Singh Ji in 1708; thereafter it refers to the Sikh Holy Scriptures the Guru Granth Sahib Ji.

Sikhism was established by Guru Nanak and nine other Sikh Gurus over the period of 1469 to 1708. Guru Nanak was the first Guru and Guru Gobind Singh the 10th (and last) Guru. Before his death, Guru Gobind Singh nominated the Sikh holy scripture, the Guru Granth Sahib as the final and eternal Guru of Sikhism. All Sikhs are required to follow the teachings of the Gurus, which upon meditation leads to salvation.