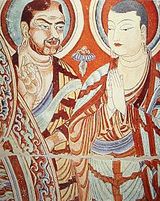 Description:
The Silk Road transmission of Buddhism to China is most commonly thought to have started in the late 2nd or the 1st century CE.Hill (2009), p. 30, for the Chinese text from the Hou Hanshu, and p. 31 for a translation of it.

The first documented translation efforts by Buddhist monks in China (all foreigners) were in the 2nd century CE, possibly as a consequence of the expansion of the Kushan Empire into the Chinese territory of the Tarim Basin.

From the 4th century onward, with Faxian's pilgrimage to India (395–414), and later Xuanzang (629–644), Chinese pilgrims too started to travel by themselves to northern India, their source of Buddhism, in order to get improved access to original scriptures. The Silk Road transmission of Buddhism began to decline around the 7th century with the rise of Islam in Central Asia.

Although the early Chinese Twenty-Four Histories rarely mention Buddhism, Michael Loewe writes, "It may be assumed that travelers or pilgrims brought Buddhism along the Silk Roads, but whether this first occurred from the earliest period when those roads were open, ca. 100 BC, must remain open to question. The earliest direct references to Buddhism concern the 1st century AD, but they include hagiographical elements and are not necessarily reliable or accurate.