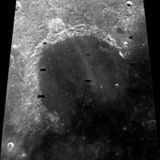 Description:
Sinus Iridum (latin for "Bay of Rainbows") is a plain of basaltic lava that forms a northwestern extension to the Mare Imbrium. It is surrounded from the northeast to the southwest by the Montes Jura range. The protruding part of the range at the southwest end is named Promontorium Heraclides, while that at the northeast end is called Promontorium Laplace. This bay and the surrounding mountains is considered one of the most beautiful features on the Moon, and is a favorite among lunar observers.

Sinus Iridum does not contain any notable impact craters, but does include the satellite crater Heraclides E in the south, Laplace A along the eastern edge, and Bianchini G in the north. The surface is level, but is marked by a number of wrinkle ridges.

The selenographic coordinates of this bay are 44.1° N, 31.5° W, and the diameter is 236 km. The feature was given the latin name for the Bay of Rainbows by Giovanni Riccioli.

By convention these features are identified on lunar maps by placing the letter on the side of the crater mid-point that is closest to Promontorium Heraclides.

The following satellite craters are associated with the Promontorium Laplace.