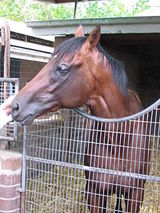 Description:
Sirmione, foaled on 25 August 2003 in Australia, is notable for winning the LKS Mackinnon Stakes at 60-1 during the 2007 spring carnival.

He is a bay Thoroughbred gelding by the outstanding sire, Encosta De Lago from World Guide (NZ) by Defensive Play (USA) that was bred by Mr M.F. Doyle, Murrulla Stud in New South Wales. World Guide is the dam of four named horses, but Sirmione is her only stakes-winner.

Sirmione was sold as a yearling at the Magic Millions sales on the Gold Coast for $300,000 to Bart Cummings. He is trained by the Cups King, Bart Cummings and raced by owners, Dr J M & Mrs T M Xipell, R Covington & L A & Mrs S J Smith. He went on to run 12th in the Melbourne Cup. Following this he then went on to win the Australian Cup in March 2008