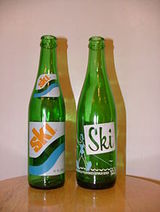 Description:
Ski is an orange and lemon flavored soft drink using actual orange and lemon concentrates manufactured by the Double Cola Company. Some have likened Ski’s unique citrus flavor to Mountain Dew, Mello Yello, Sun Drop, Vault, or Squirt. One 12 oz. can of ski contains 69 mg of caffeine, for comparison, a can of Mountain Dew contains 54 mg.Due to usage of real orange juice and lemon concentrates, the Double Cola Company claims that Ski is one of the only all-natural sodas.

The Double Cola Company of Chattanooga, Tennessee originally got the formulated Ski from Byron Clarson in 1956 who owned a Double Cola-related bottling company in Richland Center, Wisconsin. and trademarked the soda in 1958.Ski soda has also long been a mainstay and means of survival for campers and staff at the Boy Scouts of America's, Chief Logan Reservation, located in Ray, Ohio.

Bottling of Ski mainly takes place in Breese, Illinois and the drink also comes in cherry, diet and caffeine-free versions.

In 1961, Excel bottling Co. in Breese, IL bought the rights to Ski. Excel Bottling is one of the few "Mom and Pop" bottlers in the United States. It distributes Ski mainly to Clinton County and Bond County, however bottled Ski, along with its counterparts Cherry Ski, Frostie's Root Beer,and others, are being sold in high end retailers in Saint...
Read More