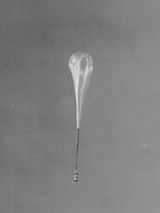 Description:
Skyhook balloons were balloons developed by Otto C. Winzen and General Mills, Inc., and used by the United States Navy Office of Naval Research in the late 1940s and in the 1950s for atmospheric research, especially for constant-level meteorological observations at very high altitudes. Instruments like the Cherenkov detector were first used on skyhook balloons.

In the late 1940s, Project Skyhook balloons provided a stable vehicle for long duration observations at altitudes in excess of 100,000 feet. Balloons, long used for collecting meteorological data, now offered the opportunity of collecting highly specialized information and photographs. The first Skyhook balloon was launched on September 25, 1947. The balloon was developed by General Mills. It carried a 63-pound payload of nuclear emulsion to over 100,000 feet. In the succeeding 10 years, over 1500 Skyhook flights were made for investigations supported by the ONR and for European scientists. These flights were made from locations in the United States, Canada, and naval vessels in the Atlantic, Pacific, Caribbean, and Arctic waters. Both Winzen Research and General Mills participated in these launchings, and in later years, the Atomic Energy Commission joined ONR in support of Project Skyhook.