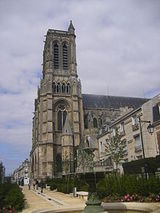 Description:
Soissons Cathedral (Cathédrale Saint-Gervais-et-Saint-Protais de Soissons) is a Gothic cathedral in Soissons, France. The construction of the south transept was begun about 1177, and the lowest courses of the choir in 1182. The choir with its original three-storey elevation and extremely tall clerestory was completed in 1211. This was earlier than Chartres, on which the design was supposed to have been based. Work then continued into the nave until the late 13th century.

The single western tower dates from the mid-13th century and is an imitation of those of Notre Dame de Paris, which it equals in height (66 m, or 216&nbsp;ft). The tower was restored after it and part of the nave were severely damaged in World War I. A matching tower on the other side of the façade was originally planned, but never built.

The graceful southern transept, the oldest portion of the whole edifice, terminates in an apse. Unlike the rest of the building, it is divided inside into four (rather than three) levels.

The choir end of the cathedral has stained glass from the 13th century. A tapestry from the 15th century depicts the life of the martyrs Gervasius and Protasius, the patron saints of the cathedral. Rubens' Adoration of the Shepherds hangs in the northern transept, as does a painting by Philippe de Champaigne.