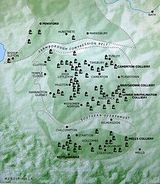 Description:
The Somerset Coalfield included pits in North Somerset, England, area where coal was mined from the 15th century until 1973.

It is part of a wider coalfield which covered northern Somerset and southern Gloucestershire in England. It stretched from Cromhall in the north to the Mendip Hills in the south, and from Bath in the east to Nailsea in the west, a total area of about . Most of the pits in the Somerset Coalfield were concentrated along the Cam Brook, Wellow Brook and Nettlebridge Valleys and in the areas around Radstock and Farrington Gurney. The pits were often grouped geographically with clusters of pits which were close together working the same coal seams and often under the same ownership. Many also shared the same trackways and tramways which took the coal to the Somerset Coal Canal or railways for distribution.

Many of the early pits were bell pits, however these were replaced as deeper seams were mined, with the deepest shaft being the Strap mine at Nettlebridge reaching . Many of the mines flooded and there were also coal dust explosions, both of which required improved ventilation and equipment. Many of the pits closed in the 19th century as the available coal was worked out. Those that survived until 1947 became part of the National Coal Board, however the expense of improving equipment and working conditions meant that even these became uneconomic and the last pit closed in 1973. There is still some...
Read More