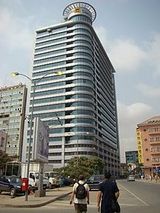 Description:
Sonangol (in Portuguese:Sociedade Nacional de Combustíveis de Angola) is a parastatal (a partially state-owned corporation or government agency, cf. national oil company) that oversees petroleum and natural gas production in Angola. Sonangol actually had become a fundraising machine of government. The group has many subsidiaries. The subsidiaries generally have Sonangol as a primary client, along with other corporate, commercial and individual clients. Angola is estimated to have over 5 billion barrels of offshore and coastal petroleum reserves, and new discoveries are outpacing consumption by a 5 to 1 ratio.

On the eve of Portuguese Angola's independence from Portugal following the election of a modern democratic government in Portugal in 1976, the company ANGOL (ANGOL Sociedade de Lubrificantes e Combustivels sarl, founded in 1953 as a subsidiary of Portuguese company SACOR) was nationalized and split in two, forming Sonangol U.E.E. and Direcção Nacional de Petróleos. Directive 52/76 instituted Sonangol as a state-owned company with a mandate to manage the country's substantial petroleum and natural gas. Using the extant remains of Texaco, Total, Shell and Mobil's oil works, Sonangol obtained the assistance of Algerian Sonatrach and of Italian Eni.

Today (as of 2006), Sonangol has over 30 subsidiaries and maintains overseas facilities in the following cities: