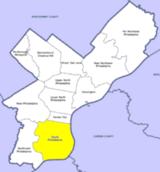 South Philadelphia began as a satellite town of Philadelphia, with small townships such as Moyamensing and Southwark.Where Pennsylvania History Began(by Henry D. Paxon,The Swedish Colonial Society, 1926)During the Industrial Revolution, the area saw rapid growth, in part due to mass immigration from Ireland. Its urbanized border reached that of Philadelphia. Along with all other jurisdictions in the county, South Philadelphia became part of the City of Philadelphia proper with passage by the Pennsylvania legislature of the city/county Act of Consolidation, 1854. The area continued to grow, becoming a vital part of Philadelphia's large industrial base and attracting immigrants from Italy, Ireland, Poland, and many other countries during the 19th and early 20th centuries, as well as Black American migrants from the southern United States during the Great Migration of the early 20th century. The immigrants and migrants became the basis of South Philadelphia's unique and vibrant culture that developed over the next several decades. Struggling to maintain their Catholic identity in a mostly Protestant city, the Irish built a system of...
Read More