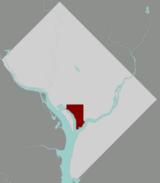 Southwest Waterfront is part of Pierre L'Enfant's original city plans and includes some of the oldest buildings in the city, including the Wheat Row block of townhouses, built in 1793, and Fort McNair, which was established in 1791 as "the U.S. Arsenal at Greenleaf Point."

After the Civil War, the Southwest Waterfront became a neighborhood for the poorer classes of Washingtonians. The neighborhood was divided in half by Fourth Street SW, then known as 4 Street; Scottish, Irish, German, and eastern European immigrants lived west of 4 Street, while freed blacks lived to the east. Each half was centered on religious establishments: St. Dominic's Catholic Church and Temple Beth Israel on the west, and Friendship Baptist Church on the east. (Also, each half of the neighborhood...
Read More