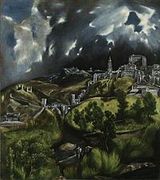 Description:
The Spanish Golden Age (, Golden Century) period of flourishing in arts and literature in Spain, coinciding with the political rise and decline of the Spanish Habsburg dynasty. El Siglo de Oro does not imply precise dates and is usually considered to have lasted longer than an actual century. It begins no earlier than 1492, with the end of the Reconquista (Reconquest), the sea voyages of Christopher Columbus to the New World, and the publication of Antonio de Nebrija's Gramática de la lengua castellana (Grammar of the Castilian Language). Politically, it ends no later than 1659, with the Treaty of the Pyrenees, ratified between France and Habsburg Spain. The last great writer of the period, Pedro Calderon de la Barca, died in 1681, and his death usually is considered the end of El Siglo de Oro in the arts and literature.

The Habsburgs, both in Spain and Austria, were great patrons of art in their countries. El Escorial, the great royal monastery built by King Philip II of Spain, invited the attention of some of Europe's greatest architects and painters. Diego Velázquez, regarded as one of the most influential painters of European history and a greatly respected artist in his own time, cultivated a relationship with King Philip IV and his chief minister, the Count-Duke of Olivares, leaving us several portraits that demonstrate his style and skill. El Greco, another respected artist from the period, infused Spanish art with the styles of the Italian renaissance and helped...
Read More