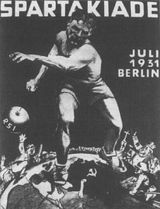 Description:
Spartakiad initially was the name of an international sports event that the Soviet Union attempted to use to both oppose and supplement the Olympics. (In Russian, there is a certain parallelism in the names: "Spartakiada" and "Olimpiada".) The name, derived from the name of the slave rebel leader, Spartacus,Great Soviet Encyclopedia, 3rd edition, volume 24 (part 1), p. 286, Moscow, Sovetskaya Entsiklopediya publisher, 1976 was supposed to symbolize proletarian internationalism because Spartacus' revolt united slaves from diverse ethnic backgrounds within the Roman Empire. As a Classical figure, Spartacus also stood directly in contrast to the aristocratic nature of the Ancient Olympic Games on which the modern "capitalist" Olympics were, according to the Soviet hierarchy, supposedly based. The first Winter Spartakiad was held in February 1928 in Oslo, and the first Summer Spartakiad was held in August 1928 in Moscow.

In 1952 the Soviet Union decided to join the Olympic movement, and international Spartakiads ceased. However the term persisted for internal sports events in the Soviet Union of different levels, from local up to the Spartakiad of the Peoples of the USSR (Спартакиада народов СССР, Spartakiada narodov SSSR). The latter event was held twice in four years: Winter Spartakiad and Summer Spartakiad, with...
Read More