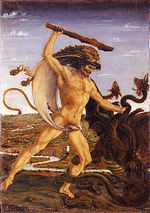 Description:
The Spartan army was the military force of Sparta, one of the leading city-states of ancient Greece. The army stood at the centre of the Spartan state, whose citizens' primary obligation was to be good soldiers.

The army in the Mycenaean age

The first reference to the Spartans at war is in the Iliad, where they participate among the other Greek contingents. Like the rest of the Mycenaean armies, it was composed largely of infantry, equipped with short swords, spears, Dyplon and a simple rounded bronze shield. This was an age of heroic warfare with simple tactics, often little more than a general charge and a great deal of killing — it was common for entire armies to be chased down and killed after a rout."

War chariots were used by the elite, but unlike their counterparts in the Middle East, they appear to have been used mostly for transport, with the warrior dismounting to fight on foot and then remounting it to withdraw from combat, although some accounts show warriors throwing...
Read More