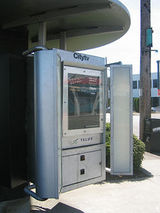 Description:
Speakers' Corner was a television series which aired weekly on Citytv and A (formerly A-Channel) stations in Canada, featuring numerous unscripted short segments on a variety of topics as recorded by members of the general public such as rants, big-ups, shoutouts, jokes, music performance, etc. After the video was complete, it was edited for television. The show was an example of Citytv founder Moses Znaimer's philosophy of interactive broadcasting.

Rogers Media, owners of Citytv since 2007, announced the cancellation of the series effective from 31 August 2008, citing the emergence of other interactive media.

Speakers' Corner began in 1990 with the original booth outside the Citytv studios in Toronto. The booth has been used for everything from heartrending pleas for assistance in locating missing children or pets, to humorous rants on things that annoy the speaker. It has also been used by musicians looking to get exposure — most famously, the then-unknown Barenaked Ladies reached their earliest audiences, prior to the release of The Yellow Tape, by performing several songs in the Speakers' Corner booth.

Versions of the show began on other regional CHUM-owned television stations such as CHRO in Ottawa and CFPL in London. Citytv Bogotá (which licensed the brand from CHUM) also launched its own 'Speaker's Corner'-esque booth called 'Citycapsula' when it signed on in 1996; unlike the Canadian versions, Citycapsula is free.