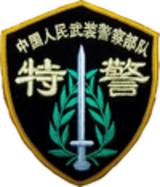 Description:
<!-- please don't enter any material without citations, sources, or references. Anonymous editors have been adding apparent original research to this text and the IAU article, resources in chinese are welcomed but if possible, quote or reference from an english article instead-->Special Police Units (Abbreviation: SPU; Simplified Chinese: 特警队) are SWAT units of the Chinese People's Armed Police at the provincial and municipal level. There is at least one of such unit in each Chinese province to offer their services when requested by the local police, or other law enforcement agencies such as the customs service and the regular police.

With the rise of global terrorism and increasing incidence of local aircraft hijackings in the 80's , came a need for a tactical armed response group to respond to both such local and international crises. With approval from the People's Liberation Army, a select group of elite officers was chosen and organized into the Anti-hijack Special Police Group (反劫机特种警察部队) on July 22, 1982, officially code-named Public Security Unit 722 (公安部警字722部队). They were officially inaugurated into the PLA in the capital of Beijing during a ceremony on the 28th.