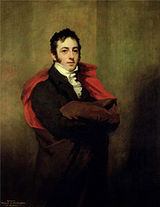 The second son of the 9th Earl of Northampton (later the First Marquess), Compton studied at Trinity College, Cambridge, receiving an M.A. in 1810. In 1812, following the assassination of his cousin, the prime minister Spencer Perceval, Compton, by now Earl Compton as heir to the Marquessate, took his seat for Northampton in the House of Commons.

In the Commons, Compton established a reputation as something of a maverick. Despite his family's strong Tory credentials, he often voted against the Tory government of the day. This led to his losing his seat in the general election of 1820.

On 24 July 1815 Compton married Margaret Maclean-Clephane, who was herself a poet admired by Sir Walter Scott and William Wordsworth, although her poetry was not published. The marriage was a happy one, producing six children. The couple lived in Italy for ten years from 1820 to 1830. Compton succeeded his father as Marquess of Northampton in 1828. Following Lady Northampton's death in the latter year, Northampton returned to England. Among their children were: