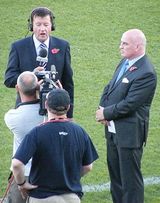 Description:
In sports broadcasting, a commentator gives a running commentary of a game or event in real time, usually during a live broadcast. The comments are normally a voiceover, with the sounds of the action and spectators also heard in the background. In the case of television commentary, the commentator is on screen rarely if at all. In North American English, other general terms for a commentator are announcer, presenter, or sportscaster. ("Sportscaster" may also refer to a newscaster covering sports news.) In British broadcasting, the presenter of a sports broadcast is usually distinct from the commentator, and often based in a remote broadcast television studio away from the sports venue. Often, the main commentator (called a play-by-play in North America) is assisted by a color commentator, and sometimes a sideline reporter.

Play-by-play announcers are the primary speakers, valued for their articulateness and ability to describe the events of an often fast-moving contest. Color commentators are valued for experience and insight into the game, and are often asked questions by the play-by-play announcer to give them a topic for analysis. The latter most often have gained their experience in the sport as a player and/or coach, while the former is more likely to be a professional broadcast journalist than a participant in the sport, although there are numerous exceptions to these general trends.

The most common format for a sports......
Read More