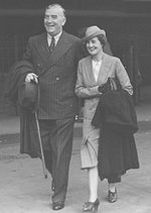 Spouse Of The Prime Minister Of Australia

Spouse of the Prime Minister of Australia

The incumbent Prime Minister (since 24 June 2010) is Julia Gillard and her domestic partner is Tim Mathieson. She is the only Australian Prime Minister who has never married. John McEwen was a widower at the time of becoming Prime Minister, and he remarried after leaving the office.

The Prime Minister's spouse has no official duties. Some earlier spouses stayed mainly at home and took little part in public life.

However, most recent Prime Ministers' spouses have been involved in charities or community organisations, working to raise public awareness, funds, and support for a range of causes. They generally assist their partners in political campaigns, and participate in official duties that come with the position, such as hosting foreign dignitaries, and, in particular, entertaining the spouses of dignitaries; accompanying the Prime Ministers on national and international trips; attending conferences and functions; and speaking in public, particularly in the Prime Minister's constituency. They have attended the opening of Parliament; hosted visitors at The Lodge and Kirribilli House; visited Buckingham Palace, the White House, or the Japanese Imperial Palace; and been present at royal coronations and conferences.<ref name =...
Read More