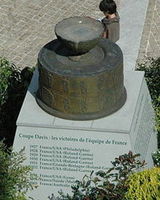 Description:
Le Stade de Roland Garros ("Roland Garros Stadium") is a tennis venue located in Paris, France. It hosts the French Open tennis tournament (known as the Roland Garros Tournament within France), a Grand Slam event played annually in May and June. The facility was constructed in 1928 to host France's first defense of the Davis Cup. It is named for Roland Garros, a pioneer aviator (completed the first solo flight across the Mediterranean Sea), engineer (inventor of the first forward-firing aircraft machine gun), and World War I hero (the first pilot to shoot down five enemy aircraft, and to be called an "ace" for doing so), who was killed in aerial combat in 1918.

While the Roland Garros surface is invariably characterized as "red clay", the courts are in fact surfaced with white limestone,...
Read More