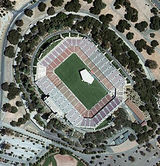 Description:
Stanford Stadium (capacity 50,000 as of 2006) is an outdoor athletic stadium on the Stanford University campus, the home of Stanford Cardinal college football team. It originally opened in 1921 as a football and track stadium, an earthen horseshoe with wooden bleacher seating and flooring upon a steel frame. Its original seating capacity was 60,000, which grew to 85,500 by 1927 as a nearly-enclosed bowl. Immediately following the 2005 season, the stadium was demolished and rebuilt as a dual-deck concrete structure, without a track.

Built partly in competition with the University of California, Berkeley to see who could build a football stadium first, Stanford Stadium was built in four months and opened its gates on November 19, 1921, replacing Stanford Field. The first game was against California, who defeated Stanford 42-7. Seating capacity was originally 60,000, with a 66-row, U-Shaped structure second only to the Yale Bowl in size at the time. In 1925, 10,200 seats were added to the stadium, nearly enclosing the horseshoe while still keeping the overall height of the facility intact. In 1927, 14 additional rows of seating were added, increasing the stadium to its maximum capacity of 85,500, with 80 rows of seating.

In 1935, Stanford Stadium set a record for single-game attendance, with 94,000 spectators filling the Stadium for a 13-0 victory over Cal.