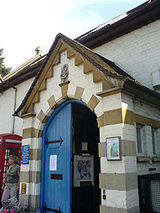 Description:
The Stanley Spencer Gallery is a small gallery in Cookham, a village next to the River Thames in the English county of Berkshire.

The gallery celebrates the famous English painter Sir Stanley Spencer (1891–1959), who lived in the village. Many of his works depict villagers and village life and his religious paintings often had Cookham as their backdrop.

The building was erected as a Methodist Chapel in 1846. As a boy, Stanley Spencer, and also his mother were amongst the congregation. The modest Gothic porch was added in 1911 when Colonel F. C. Ricardo, a great local philanthropist, purchased it after a new larger one was built. He set up a reading room there and named it the King's Hall after King George V. On his death in 1924, he left a legacy of £814 2s 0d to pay for the maintenance of the Hall. The Stanley Spencer Gallery was opened in the hall in 1962.

Not far from the gallery is "Fernlea", the cottage where Spencer was born and lived in Cookham High Street.