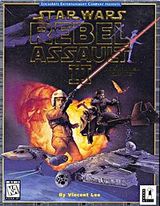 This part of the series contained mostly original filming with actors and stunts, while the scenery and the space scenes were 3D rendered. According to LucasArts' magazine "The Adventurer", this game was the first media to incorporate live-action actors and footage in the Star Wars universe since Return of the Jedi. The stormtrooper armor, weapons, helmets and suits seen to be worn by the actors, were not made for the game, but are the actual props seen in the original trilogy, taken from the archive storage of Lucasfilm.

The game makes use of the INSANE game engine.

Here, the player Rookie One is clearly shown and is a male character. He commands ships not appearing in the previous game, like a YT-1300 Corellian Transport, a B-wing, a Y-wing and encounters new opponents, like TIE Interceptors. The fly videos now seem to move and rotate according to how the player 'moves', so that there is an illusion of 'steering' the ship (which in reality is following a 'rail' in a pre-rendered course).

After the destruction of the first Death Star, Darth Vader has begun a new project for the Galactic Empire. Meanwhile, in the Rebel Alliance, rumors have grown concerning "ghost ships" attacking Rebel patrols.

Rookie One (voiced by Jamison Jones), while flying with his wingman, receives a distress call from a transport being...
Read More