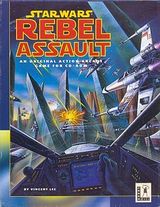 Description:
Star Wars: Rebel Assault was the first CD ROM-only game published by LucasArts, set in the Star Wars universe. It was released for the PC followed by subsequent releases on the Sega CD, Mac and 3DO platforms.

Although the scenario, the plot, and the variety of missions were considered neither original nor rich, the game was valued for the technical details, since it featured digitized footage (albeit limited, most replaced by CGI rendered sequences) and music from the original movies, and full speech. Rebel Assault is one of the oldest titles to make use of extensive full motion video (FMV) on the PC. In this case the video was used to display pre-rendered 3D graphics that were far ahead of what a PC could render in real-time at the time. Developers pre-rendered various environments and battles and the player flew through these environments. Unfortunately, because it was pre-rendered 3D graphics, the level of player control was extremely limited. In fact, the player could not stray from the path in more than a few branched areas and was usually limited to only aiming the crosshairs at enemies.

The game consisted mainly of recreating famous scenes from the movies, rather than being accurate to the Star Wars storyline: it primarily follows the events of A New Hope, but also includes elements from the Battle of Hoth.

The gameplay consists of various spaceflight missions, mainly confined in a certain video looping. The course of the ship is predetermined and the player has to hit...
Read More