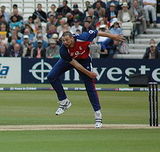 He made his Test and ODI debut for England in 2002, and achieved modest success in these early stages of his career, showing promise as a capable strike bowler for England. This was borne out during the tour of the West Indies in 2003-04, where he produced some of his finest bowling and went on to become the highest wicker-taker in the series. He followed it up by playing a vital role in England's victory in the 2005 Ashes series, and was selected as one of the Wisden Cricketers of the Year in 2005. At the time, he was regarded as one of the world's best fast bowlers.

Harmison's performance following the 2005 Ashes victory was inconsistent, and he announced his retirement from ODI's in 2006. His problems were compounded by niggling fitness worries and intense competition for a place in the English team. Although he came out of ODI retirement in 2008, his place in the squad was never permanent, ultimately leading to his being dropped since 2009. His last Test for England was the final test of the 2009 Ashes series, and he played his last ODI against West Indies in the same year. Although he has not announced formal retirement from the game, it is generally believed that he is unlikely to make a comeback to the...
Read More