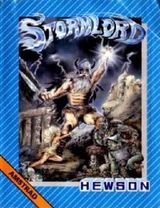 Description:
Stormlord is a game developed by Hewson Consultants in 1989 for the ZX Spectrum, Commodore 64, Amiga, Atari ST, Amstrad CPC and DOS-based computers. It was ported to the Mega Drive/Genesis from the Amiga version by Punk Development for Razorsoft in 1990, and in 2006 a version for the Symbian OS smartphones was also released.

The old warrior Stormlord has been summoned to free several fairies from the spell bubbles in which the evil Queen Badh has trapped them in order to rule over their enchanted world, The Realm.

The player can eliminate enemies by throwing a star-like weapon and travel rapidly from place to place by means of the falcon (replaced by a particularly-powerful trampoline in the ZX Spectrum version). However, sometimes the journeys must be carefully planned out, since the falcon can transport the player on one-way trips, and if all fairies have not been freed from the previous area, it will be impossible to win. The player has a limited amount of time to finish (before the sunset).

Sega of America pulled the Sega Genesis edition of the game off the market and forced Razorsoft to give clothing to cover up the faries' bare breasts. Indeed, certain advertisements for the game often made note of the controversy. Yet, programmer Kevin Seghetti stated that the changes on the Genesis version were done voluntarily. However, when Amstrad...... ...
Read More