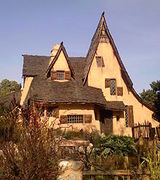 Description:
A Storybook House refers to an architectural style popularized in the 1920s in England and America.

The storybook style is a nod toward Hollywood design technically called Provincial Revivalism and more commonly called Fairy Tale or Hansel and Gretel. A primary example can be found in the 1927 Montclair, Oakland firehouse, and in a more traditional English cottage-style in the 1930 Montclair branch library. Idora Park in north Oakland, California is a four square block storybook architecture development begun in 1927 on the grounds of the old amusement park.

The primary architects that worked in this style are: Harry Oliver, W.R. Yelland, W.W. Dixon and Carr Jones among many other local architects.

<!-- Image with unknown copyright status removed: -->Oliver is noted for his Spadena House in Beverly Hills, and the Tam O'Shanter Inn in Los Feliz .

W.W. Dixon noted for his work with developer R.C. Hillen in creating the Dixon & Hillen catalog of homes. Dixon is noted for Stonehenge & Stoneleigh villages in Alameda as well as Picardy Drive in Oakland, California.

Carr Jones is noted for the (il Posinto Restaurant) post office in Lafayette, California. He designed and built...
Read More