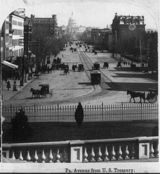 Description:
For just under 100 years, between 1862 and 1962, streetcars in Washington, D.C. transported people across the city and region.

The first streetcars in Washington D.C. were drawn by horses and carried people short distances on flat terrain; but the introduction of cleaner and faster electric streetcars, capable of climbing steeper inclines, opened up the hilly suburbs north of the old city and in Anacostia. Several of the District's streetcar lines were extended into Maryland, and two Virginia lines crossed into the District. For a brief time, the city experimented with cable car, but by the beginning of the 20th century, the streetcar system was fully electrified. A bit later, the extensive mergers dubbed the "Great Streetcar Consolidation" gathered most local transit firms into two major companies. In 1933, all streetcars were brought under one company, Capital Transit. The streetcars began to scale back with the rising popularity of the automobile and pressure to switch to buses. After a strike in 1955, the company changed ownership and became DC Transit, with explicit instructions to switch to buses. The system was dismantled in the early 1960s and the last streetcar ran on January 28, 1962.

Public transportation began in Washington, D.C. almost as soon as the city was founded. In May 1800, two-horse stage......
Read More