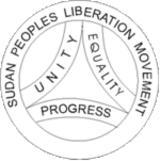 Description:
The Sudan People's Liberation Movement (SPLM) is a political party in South Sudan. It was initially founded as a rebel political movement with a military wing known as the Sudan People's Liberation Army (SPLA). The SPLM fought in the Second Sudanese Civil War against the Sudanese government from 1983 to 2005. In 1989, it joined the main opposition group in Sudan, the National Democratic Alliance (NDA), which in January 2005 signed a Comprehensive Peace Agreement with the Sudanese government. SPLA/M has since had representatives in the Government of Sudan, and was the main constituent of the Government of the then semi-autonomous Southern Sudan. South Sudan became a sovereign state on 9&nbsp;July 2011.

It was led by John Garang until his death on 30 July 2005. It is now led by Salva Kiir Mayardit who is also the President of Southern Sudan and Vice President of Sudan. In 2007, Gen. Dominic Dim Deng, a prominent General, was appointed Minister for SPLA Affairs. The first political leader of the Sudan People's Liberation Army. Gen. Dominic Dim Deng, his wife and 21 other senior Officers, including senior SPLM official Dr. Justin Yac Arop, died in a plane incident on 2 May 2008. He was buried together with his wife, after a full state ceremony, at the SPLA General Headquarters in Juba.

According to Mennan, 'the Dinka tribe - who formed the core leadership of the SPLA, the signatory of the CPA, dominate the Government of Southern...
Read More