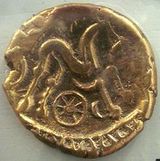 Description:
The Suessiones were a Belgic people of north-eastern Gaul in the 1st century BC, inhabiting the region between the Oise and the Marne, based around the present-day city of Soissons. They were conquered in 57 BC by Julius Caesar.

Caesar recounts in his Gallic Wars that in 57 BC the Suessiones were ruled by Galba, and that in living memory of that time their king Diviciacus had exercised sovereignty over most of the Belgae and even parts of Britain.Commentarii de Bello Gallico, Gaius Julius Caesar, 57 bc, p. ii

Coinage minted by Belgic Gauls first appeared in Britain in the mid-2nd century bc with the coinage now categorized as the "Gallo-Belgic A" type. Coins associated with King Diviciacus of the Suessiones, issued near or between 90 and 60 bc, have been categorized as "Gallo-Belgic C." Finds of this issue of coin extend from Sussex to the Wash, with a concentration of finds near Kent. A later issue of coin, "Gallo-Belgic F" (c. 60-50 bc), has concentrated finds near Paris, throughout the lands of the Suessiones, and the southern, coastal areas of Britain. These finds lead scholars to suggest that the Suessiones had...
Read More