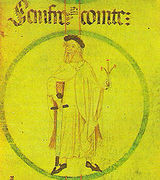 He was the son of Wilfred the Hairy and younger brother of the previous Count of Barcelona, Wilfred II Borrel. He worked jointly with his brother in the government of the Counties held by their father after his death in 897. He did not reign independently until his brother's death in (911).

However on the death of his uncle, Count Radulf I of Besalú, in 913 or 920, a conflict emerged between Sunyer and his brother Count Miró II of Cerdanya over the succession of the County of Besalú. In exchange for the total renunciation of all claims on the County of Barcelona, Sunyer gave up his claim on Besalú.

Sunyer was apparently married by 917, and later appears with wife Richilda, speculated, based on the introduction of novel names into the family, to have been daughter of the Count of Rouergue. They had four sons and a daughter: Ermengol, Miró, Borrell, Adelaide (also called Bonafilla), and Wifred.

Sunyer made important efforts with domestic politics, protected the church and strengthened its institutions and gave it more land and income. He also continued to encourage the repopulation of the county of Ausona.

He abandoned defensive stance adopted by his predecessors and took up the fight actively against the Moorish states to the south. Battles were fought at Lleida and Tarragona. At the same time, he managed to retain diplomatic relations with......
Read More