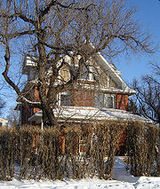 Description:
Sutherland is a mostly residential neighbourhood located in east-central Saskatoon, Saskatchewan, Canada. It is an older suburban subdivision, composed of a near-even mix of single-family detached houses and multiple-unit apartment and semi-detached dwellings. As of 2006, the area is home to 5,206 residents. The neighbourhood is considered a middle-income area, with an average family income of $45,516, an average dwelling value of $204,213 and a home ownership rate of 43.8%. Sutherland was originally a town outside of Saskatoon before being annexed by the city in 1956.

James Powe and his family arrived in Saskatoon from Ontario in 1884. The Powe family homesteaded in the area which is now Sutherland in 1893. Their grand house, which stands on the present-day corner of Central Avenue and 115th Street, was built between 1912 and 1914. The foundation was made from local fieldstone, making the basement walls as thick as .

Albert Hanson, a noted Saskatoon real estate agent, bought land in the Sutherland area beginning in 1905. He then sold some of it to the Canadian Pacific Railway, The area of Sutherland was built up as the CPR yards and station were constructed east of...
Read More