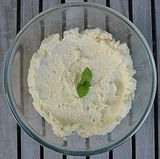 Description:
Syllabub (also sillabub,Sillabub is the preferred spelling in the OED; noted in 1537, its etymology is said to be of unknown origin. Sillabouk is a variant, noted 1573. sillibub) is a traditional English dessert, popular from the sixteenth to the nineteenth century. It is usually made from rich milk or cream seasoned with sugar and lightly curdled with wine. Mrs Beeton (1861) gives two recipes.

The recipe traces back to the time of Tudor Dynasty that ruled England from 1485 until 1603. In its early variations it was a drink made of new milk and cider, with the cows milked directly into an ale pot. This created a frothy cappuccino-like effect. A variation known as an Everlasting Syllabub allows for the cream to rise and thicken by letting it stand for several days.

The Druid's Head tavern in Kingston upon Thames, Surrey, South-West of London claims to have been one of the first taverns to make the famous dessert syllabub in the 18th century.