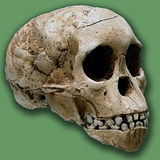 Description:
The Taung Child — or Taung Baby — is the fossilized skull of a young Australopithecus africanus individual. It was discovered in 1924 by quarrymen working for the Northern Lime Company in Taung, South Africa. Raymond Dart (1893–1988), an anatomist at the University of Witwatersrand, received the fossil, recognized its importance and published his discovery in the journal Nature in 1925, describing it as a new species. The British scientific establishment was at the time enamored with the hoax Piltdown Man, which had a large brain and ape-like teeth – the exact opposite of the Taung Child – and Dart's interpretation was not appreciated for decades.Brain, C.K. , in A Century of Nature: Twenty-One Discoveries that Changed Science and the World, Laura Garwin and Tim Lincoln, eds. The skull is in repository at the University of Witwatersrand.

The fossil consists of most of the face and mandible with teeth and, uniquely, a natural endocast of the braincase. It is estimated to be 2.5 million years old. Originally thought to have been a monkey or ape, Dart realized that the skull would have been positioned directly above the spine, indicating an upright posture. This is a trait seen in humans, but not other primates.