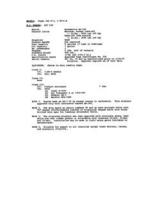 Description:
The Taylor Cub was originally designed by C. Gilbert Taylor as a small, light and simple utility aircraft, evolved from the Arrowing Chummy. It is the forefather of one of the most popular and best-known light aircraft of all time, the Piper J-3.

In 1930, C. G. Taylor and the Taylor Aircraft Company embarked on the production of a two-seat tandem low-powered aircraft, designated the Taylor Cub. The Cub featured a design with wings mounted high on the fuselage, an open cockpit, fabric-covered tubular steel fuselage and wooden wings which used the USA-35B airfoil. It was originally powered by a 20 horsepower (14.9 kilowatt) Brownback "Tiger Kitten" engine. Since the young offspring of the tiger is called a cub, Taylor's accountant, Gilbert Hadrel, was inspired to name the little airplane "The Cub".

The "Tiger Kitten" engine roared but was not strong enough to power the Cub. On September 12, 1930, a test flight of the Taylor Cub ended abruptly when the aircraft ran out of runway; the underpowered engine was unable to lift the monoplane higher than five feet (1.5 meters) above the ground. In October, a Salmson AD-9 radial engine produced in France was fitted to the Cub giving good performance, but it was expensive to maintain.