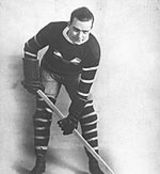 Description:
Theodore Samuel "Teeder" Kennedy (December 12, 1925 &ndash; August 14, 2009) was a professional ice hockey centre who played his entire career with the Toronto Maple Leafs from 1942 to 1957 and was captain for eight seasons. He was the first player in NHL history to win five Stanley Cups and is the last Maple Leaf to win the Hart Trophy for most valuable player. He was an essential contributor to the Maple Leafs becoming the National Hockey League's first dynasty. He was inducted into the Hockey Hall of Fame in 1966. He has been called the quintessential Maple Leaf and by some the greatest player in the team's history.

Kennedy was raised in the small Ontario town of Humberstone, now Port Colborne. Kennedy was born just eleven days after his father was killed in a hunting accident. His mother, left alone to raise four children, took a job at the local hockey arena which became Kennedy's second home. After a stellar junior hockey career, Kennedy first came to the attention of the Montreal Canadiens and attended their training camp while still in high school. However, after some disappointing experiences with Montreal management he signed shortly afterward with the Maple Leafs.

Although young, Kennedy was successful with Toronto from the start. In his first season, the 18-year-old finished second on the team in scoring and then in his sophomore year was considered the star of Toronto's upset of the record-breaking Montreal Canadiens of 1944-45. He would establish...
Read More