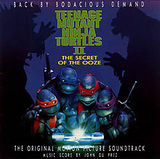 Teenage Mutant Ninja Turtles II: The Secret Of The Ooze

Teenage Mutant Ninja Turtles II: The Secret of the Ooze

The film follows the adventures of the four Turtles: Leonardo, Donatello, Michaelangelo, and Raphael. Roughly resuming from the events of the last film, the villain, Shredder, returns to take back command of the Foot Clan, and work towards getting revenge on the Turtles. When he learns the secret behind the Turtles's mutation, he becomes more dangerous than ever. The film sheds some light on the origins of Splinter and the Turtles, as well as introduces two new villains: Tokka and Rahzar. Unlike the first film, this one rarely showed the use of the Turtles' weapons. They instead fight bare-fisted for much of the film as part of an attempt to tone down the violence of the previous movie.

The film was released on March 22, 1991, and received mixed reviews from critics. It departed from a lot of the darker feelings of the 1990 film, and in contrast was more light-hearted than its predecessor. The film was still very popular, and it became the 13th highest grossing film worldwide in the year of its...
Read More