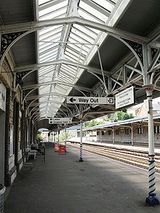 Description:
Teignmouth railway station is on the Exeter to Plymouth line and serves the town of Teignmouth, Devon, England. It is operated by First Great Western.

The station was opened by the South Devon Railway Company on 30 May 1846 as the terminus of its first section from Exeter. The line was extended to on 31 December 1846. The single platform was augmented by a second one late in 1848. At this time it was a broad gauge railway.

Trains were worked from Exeter by atmospheric power from 13 September 1847 and these were extended to Newton Abbot from 17 December 1847 until all the atmospheric trains were suspended on 9 September 1848. The atmospheric engine house was situated adjacent to the platform on the side furthest from the town, the area then being used as permanent way workshops until about 1876.

The South Devon Railway was amalgamated into the Great Western Railway on 1 February 1876. When first built the station was situated between two tunnels but the West Tunnel was opened out by June 1881 and the Eastcliffe Tunnel leading to the Sea Wall was removed by 1884, when the distinctive lattice girder bridge at the end of the Sea Wall was installed.On May 20 1892 the line was converted to standard gauge. The station was completely rebuilt soon after, the work being completed early in 1895. It now had a similar scale of facilities as those found at other big West Country resorts which had new stations during the last...
Read More