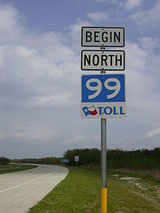 Description:
State Highway 99, also known as the Grand Parkway, is a Texas highway, which opened its first section in 1994. When State Highway 99 is complete, it will be the longest beltway in the world, and the third loop within the Houston–Sugar&nbsp;Land–Baytown metropolitan area, with Interstate 610 being the inner loop, and Beltway 8 (Sam Houston Tollway) being the middle loop. The proposed loop has been divided into 11 separate segments for construction and funding purposes. Only two of the 11 segments are complete. As of May 7, 2010, most segments of the planned highway have been fully funded.

Segment D, the first section opened, runs from just north of Interstate 10, west of Houston, south to US 59 in Sugar Land where it terminates and intersects with FM&nbsp;2759. The portion of this segment south of the interchange with the Westpark Tollway is currently a four-lane divided highway, which will become feeder roads once the main lanes are constructed. The section north of the Westpark Tollway intersection is currently a four-lane controlled-access freeway.