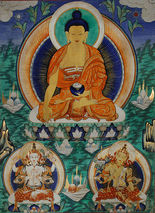 Description:
A "Thangka," also known as "Tangka", "Thanka" or "Tanka" (; ; Nepal Bhasa: पौभा) is a Tibetan silk painting with embroidery, usually depicting a Buddhist deity, famous scene, or mandala of some sort. The thankga is not a flat creation like an oil painting or acrylic painting. Rather, it consists of a picture panel which is painted or embroidered, over which a textile is mounted, and then over which is laid a cover, usually silk. Generally, thankgas last a very long time and retain much of their lustre, but because of their delicate nature, they have to be kept in dry places where moisture won't affect the quality of the silk. It is sometimes called a scroll-painting.

Originally, thangka painting became popular among traveling monks because the scroll paintings were easily rolled and transported from monastery to monastery. These thangka served as important teaching tools depicting the life of the Buddha, various influential lamas and other deities and bodhisattvas. One popular subject is The Wheel of Life, which is a visual representation of the Abhidharma teachings (Art of Enlightenment).

To Buddhists these Tibetan religious paintings offer a beautiful manifestation of the divine, being both visually and mentally stimulating.

Thangka, when created properly, perform several different functions. Images of deities can be used as teaching tools when depicting the life (or lives) of the Buddha, describing historical events concerning...
Read More