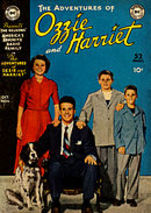 The Adventures Of Ozzie And Harriet

The Adventures of Ozzie and Harriet

Description:
The Adventures of Ozzie and Harriet is an American sitcom, airing on ABC from October 3, 1952 to September 3, 1966, starring the real life Nelson family. After a long run on radio, the show was brought to television where it continued its success, running on both radio and TV for a couple of years. The series starred Ozzie Nelson and his wife, singer Harriet Nelson (née Hilliard), and their young sons, David Nelson and Eric Nelson, better known as Ricky. Don DeFore had a recurring role as the Nelsons' friendly neighbor "Thorny". The series attracted large audiences, and although it was never a top-ten hit, it became synonymous with the 1950s ideal American family life. It is the longest-running live-action sitcom in US TV history.

In the early 1930s, a booking at the Glen Island Casino landed Ozzie Nelson's orchestra national network radio exposure. After three years together with the orchestra, Ozzie and Harriet signed to appear regularly on The Baker's Broadcast (1933–1938), hosted first by Joe Penner, then by Robert L. Ripley, and finally by cartoonist Feg Murray. The couple married on October 8, 1935 during this series run, and realized working together in radio would keep them together more than continuing their musical careers separately. In 1941, the Nelsons joined the cast of The Red Skelton Show, also providing much of the show's music. The couple stayed with the series for three years. They also built their radio experience by guest...
Read More