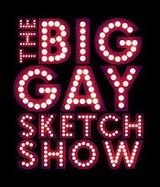 Description:
The Big Gay Sketch Show is an LGBT-themed sketch comedy program that debuted on Logo on April 24, 2007. The series is produced by Rosie O'Donnell and directed by Amanda Bearse. The program was originally titled "The Big Gay Show" but was renamed during production. As the name indicates, the show features comedy sketches with gay themes or a gay twist. Sketch topics include parodies of old sitcoms like The Honeymooners and The Facts of Life under the Nick at Nite-parodying heading "Logo at Nite," a lesbian speed dating session and an extended send-up of Broadway legend Elaine Stritch working as a Wal-Mart greeter, among other decidedly un-glamorous jobs.

Logo produced a second season of the series.

Production on season three began in March 2009. Erica Ash is no longer with the cast. In 2009, Logo announced plans for a search for new castmembers. However, the result entitled, "The Big Gay Casting Competition," was limited to an online talent search, in which videos by contestants were uploaded to logoonline.com and voted on by site visitors. The winner, Wil Heuser, was a former American Idol contestant, who appeared in only one episode of the series, but as an extra, not a castmember. Season three debuted on Logo April 13, 2010.