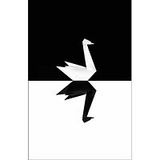 Description:
The Black Swan: The Impact of the Highly Improbable is a literary/philosophical book by the epistemologist Nassim Nicholas Taleb.The book focuses on the extreme impact of certain kinds of rare and unpredictable events (outliers) and humans' tendency to find simplistic explanations for these events retrospectively, after the fact. This theory has since become known as the black swan theory.

The book also covers subjects relating to knowledge, aesthetics, and ways of life, and uses elements of fiction in making its points.

As of March 2009 according to Slate, The Black Swan sold close to 1.5 million copies.It also spent seventeen weeks on the New York Times Bestseller list

The main idea in Taleb's book is not to attempt to predict Black Swan Events, but to build robustness to negative ones that occur and being able to exploit positive ones. Taleb contends that banks and trading firms are very vulnerable to hazardous Black Swan Events and are exposed to losses beyond those that are predicted by their defective financial models.

The book's position is that a Black Swan Event depends on the observer—using a simple...
Read More