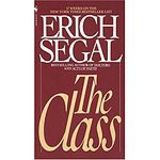 Description:
The Class is Erich Segal's 6th novel, published in 1985. The class of the title is the Harvard Class of 1958, and particularly refers to five fictional members of this class: Andrew Eliot, Jason Gilbert, Theodore Lambros, Daniel Rossi and George Keller.

The Class follows the diverse fates of five members of Harvard's Class of 1958, recording the way their lives intertwine, and coming to a dramatic conclusion at their class reunion, twenty-five years later.

Andrew Eliot comes from the Boston Brahmin Eliot family. Due to his background, he always feels the pressure of high expectations, and suffers from a lack of confidence as a result. He is otherwise laid-back and friendly, and a good friend to all his classmates. To experience life without privilege and to fulfill his military obligation, he serves in the navy as an ordinary swabbie. After his military service, he makes an ill-fated marriage to the daughter of one of his father's classmates and takes up a career in investment banking. Unfortunately, his wife is a serial adultress and alcoholic and demands a divorce, leaving him estranged from his own son and daughter, with limited visitation after his wife places both in boarding school at the age of 9 and 6, denying him custodial rights and frustrating his attempts to give them a home life. He has an interest in his family's history during the American Revolution, which in turn leads to him following his conscience and helping organize the Moratorium Day...
Read More