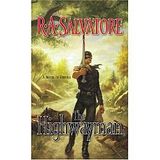 Description:
The Highwayman is a novel by R.A. Salvatore set in his world of Corona, as made famous in his DemonWars Saga. The Highwayman tells the story of a young crippled boy named Bransen Garibond. The orphaned son of the Jhesta Tu mystic Sen Wi and the Abellican priest Brother Dynard, he eventually is able to move normally by learning to center his body to become the hero known as the Highwayman.

Pryd Holding, where much of the story is set, is troubled by the threat of powrie dwarves, domination by other kingdoms and religious conflicts between the brutal Samhaists, led by the cruel and evil Bernivvigar and the seemingly more benevolent brothers of Blessed Abelle, to which Brother Bran Dynard belongs. Also complicating matters is that Prince Prydae, the last of his line, suffers an injury in battle that leaves him impotent. Brother Dynard has recently returned from the south, where he was sent to enlighten the people, but instead became fascinated and enlightened by the people, and took a wife, the beautiful Jhesta Tu mystic Sen Wi. Sen Wi has come to Pryd holding with Dynard to help explain the ways of her people to the brothers of Blessed Abelle.

One night, a beautiful young woman, Callen Duwornay, is sentenced to death for adultery. Forced to endure sexual humiliation as part of her punishment, she is stripped completely naked in front of the community, is bitten by a poison snake and then left for dead, hung over the road that is being constructed to connect Pryd Holding...
Read More