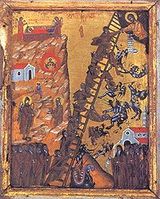 The Ladder Of Divine Ascent

The Ladder of Divine Ascent

Description:
The Ladder of Divine Ascent, or Ladder of Paradise (Κλίμαξ; Scala or Climax Paradisi), is an important ascetical treatise for monasticism in Eastern Christianity written by John Climacus in ca. AD 600 at the request of John, Abbot of Raithu, a monastery situated on the shores of the Red Sea.

The Scala, which obtained an immense popularity and has made its author famous in the Church, is addressed to anchorites and cenobites and treats of the means by which the highest degree of religious perfection may be attained. Divided into thirty parts, or "steps", in memory of the thirty years of the life of Christ, the Divine model of the religious, it presents a picture of all the virtues and contains a great many parables and historical touches, drawn principally from the monastic life, and exhibiting the practical application of the precepts.

At the same time, as the work is mostly written in a concise, sententious form, with the aid of aphorisms, and as the reasonings are not sufficiently closely connected, it is at times somewhat obscure. This explains its having been the subject of various commentaries, even in very early times. The most ancient of the manuscripts containing the Scala is found in the Bibliothèque Nationale in Paris<!--sic? the CathEnc has 'Bibliotheque Rationale', which seems to be an ORC error--> and was probably brought from Florence by Catherine de' Medici. In some of these manuscripts, the work bears the title of "Spiritual...
Read More