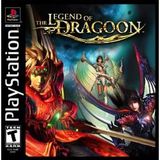 The Legend Of Dragoon

The Legend of Dragoon

Description:
The Legend of Dragoon is a console role-playing game developed and published by Sony Computer Entertainment for the PlayStation. It was released in Japan on December 2, 1999, in North America on June 11, 2000, and on January 19, 2001 in Europe. Despite mixed critical reception, the game has amassed a very large fanbase following, including several online petitions for a remake, prequel or sequel.

The Legend of Dragoon features three modes of play: the world map, the field map, and battle mode. The world map is linear with the controlled character's movements, which is then limited to dotted lines from place to place. The field map is used whenever the player enters a town, dungeon, or landmark. It consists of 3D characters on a 2D pre-rendered background. Animations are overlaid to create motion such as the movement of water or light effects. Battle mode is a 3D field that compliments the current field map. Turn-based battles occur in this between playable characters and CPU-controlled enemies. Standard actions such as attack, magic, defend, item and escape are present and implemented in various ways.

The Additions combat system was a new system that was implemented in The Legend of Dragoon which crossed a new boundary within turn based combat games. While new and challenging, the Addition system was criticized for requiring too much precision at times, especially later on near the end of the game where Additions became more complex and required more...
Read More