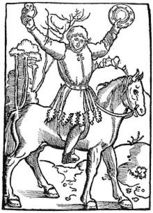 Description:
The Legend of Thyl Ulenspiegel and Lamme Goedzak () is a 1867 novel by Charles De Coster. Based on the 14th century Low German figure Till Eulenspiegel, Coster's novel recounts the allegorical adventures as those of a Flemish prankster Thyl Ulenspiegel during the Reformation wars in the Netherlands.

De Coster was one of many 19th Century nationalist writers who made use of - and considerably adapted and changed - pre-existing folk tales. In this case, Thyl Ulenspiegel is made into a Protestant hero of the time of the Dutch War of Independence (or rather, of the major part played in that war by the Flemish, even though Flanders itself was doomed to remain under Spanish rule).

De Coster incorporated in his book many of the original amusing Ulenspiegel tales, side by side with far from funny material - for example, graphic depictions of tortures by the inquisition and auto de fe. As depicted by De Coster, Ulenspiegel carries in a locket around his neck the ashes of his father, burned at the stake on charges of heresy - a feature never hinted at in any of the original folk tales.

The novel was later illustrated with a series of linocuts by Frans Masereel, the foremost Belgian modernist painter and engraver.

The movie based on the novel was filmed in the USSR by Aleksandr Alov and Vladimir Naumov, "The Legend of Till Ullenspiegel" (1976), http://www.imdb.com/title/tt0074784/

Ulenspiegel was mentioned in Mikhail Bulgakov's "The Master and Margarita" as a possible...
Read More